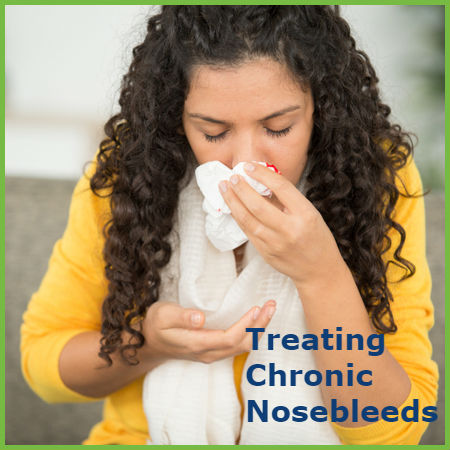 Are There Different Types of Nosebleeds?

The lining of the nose contains many tiny blood vessels. These small blood vessels are located near the surface of the nose, which makes them susceptible to damage due to simple injuries. The most common cause of epistaxis is dry air.

Other causes of nosebleeds include:

How Are Chronic Nosebleeds Diagnosed?

A rhinologist can use a variety of testing methods to diagnose chronic nosebleeds, including:

Nasal endoscopy – a procedure using a unique instrument that is performed by a rhinologist to view the blood vessels lining the nose.

CT scan of the nose – CT scans or CAT scans are used to provide doctors with a more detailed look at the nose to better determine the cause of the nosebleeds.

X-Ray of the face and nose – X-rays allow doctors to see the inside of the nasal cavity without making incisions.

Complete blood count – this is a test doctors perform to check for blood disorders.

Partial thromboplastin time – doctors use this test to determine how long it takes for your blood to clot.

What Are the Treatment Options for Chronic Nosebleeds?

Treating an anterior nosebleed can be done safely at home. While sitting in an upright position, squeeze the soft part of the nose while keeping both nostrils closed for no less than 10 minutes. Lean forward while breathing through your mouth. Release both nostrils after 10 minutes to check if the bleeding stops. Avoid lying down while trying to stop a nosebleed.

Lying down while trying to stop a nosebleed can cause you to swallow blood, which can upset your stomach. Applying a cold compress on the bridge of the nose or using a nasal decongestant can help with nosebleeds. Posterior nosebleeds are more severe than anterior nosebleeds and should be treated by a medical professional.

If you experience chronic nosebleeds, Dr. Kuperan at Houston Advanced Nose & Sinus can help. At Houston Advanced Nose & Sinus, we treat a variety of nose and sinus conditions, including chronic nasal drip, sinus infection, nosebleeds, nasal obstruction, and other conditions. Feel free to take our sino-nasal quiz before booking an appointment or contacting us.