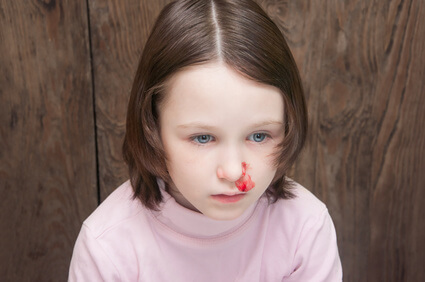 Epistaxis: Causes and Treatment of Nosebleeds

Nosebleeds, also known as epistaxis, are caused by damage to the delicate vessels within the lining of the nasal cavity. Most episodes arise from the nasal septum, the midline structure just inside of the nostrils, which is easily injured by nose-picking and other sources of trauma. Most cases will subside spontaneously or with the aid of gentle pressure to the nose just below the nasal bones. Less commonly, bleeding arises from larger vessels in the back of the nose and is more severe, requiring urgent treatment by a physician. The most widely recognized risk factors for nosebleeds include nose-picking, head trauma, sinus infections, dry air, clotting disorders, blood thinners (ex. Warfarin) and antiplatelet medications (such as aspirin), nasal tumors, and hereditary hemorrhagic telangiectasia (HHT, or Osler-Weber-Rendu syndrome).

When nosebleeds are mild to moderate in severity, greater than 90% will resolve with a combination of leaning forward to prevent swallowing blood, compressing the nose firmly just below the nasal bones for at least 10-15 minutes, and repeating if necessary. Nasal decongestant sprays such as Afrin © constrict blood vessels and also aid in slowing and stopping mild to moderate nosebleeds. Afrin is recommended as the first-line treatment of post-operative nosebleeds after sinus surgery. It should not, however, be used for the purpose of decongesting your nose on a regular basis (never for more than 2 or 3 days at a time). Patients taking blood thinners and/or anti-platelet medications may experience prolonged bleeding from even minor vessel trauma in the nasal cavity. Consult with your prescribing physician prior to withholding any of these important medications, as doing so may risk heart attack or stroke. Unfortunately, patients on these medications as well as those patients with clotting disorders are often unable to resolve nosebleeds without additional intervention by a physician.

When recurrent nosebleeds occur over several days or weeks despite taking reasonable precautions (avoiding heavy lifting, straining, vigorous exercise, or placing anything into the nose aside from gentle nasal saline sprays), then nasal endoscopy by a qualified physician is recommended in order to diagnose the underlying cause of the bleeding and determine the most appropriate treatment. Often, a small vascular area of the nasal septum is responsible and can be cauterized in the office using silver nitrate. Rarely, nasal polyps or even tumors are responsible for recurring nosebleeds and require additional management in a timely fashion.

Profuse nosebleeds can be serious, and even life-threatening if not treated in a timely and appropriate manner. Bleeding from larger vessels in the back of the nose tends to present as a large amount of bleeding from both nostrils with associated clots and bleeding down the back of the throat in many cases. Posterior bleeding may resolve intermittently as these large vessels spasm and close off; however, they are likely to reopen and bleed in a recurring fashion if not treated appropriately. Severe nosebleeds following head trauma require CT imaging to evaluate for skull base fractures and associated vascular injuries.

In the office or hospital setting, severe nasal bleeding is initially controlled with nasal packing and clot-forming agents when possible. Studies have shown that the most cost-effective and efficient method of managing severe posterior nosebleeds is to treat them urgently in the operating room with cauterization and/or clipping of the vessels responsible for the bleeding. Alternative treatments include hospital observation with nasal packs in place for several days, or endovascular embolization of the bleeding vessels by an Interventional Radiologist.

If you or someone you know is suffering from recurring or severe nosebleeds, schedule an appointment with the fellowship-trained Rhinology specialist, Dr. Kuperan at Houston Advanced Nose and Sinus.