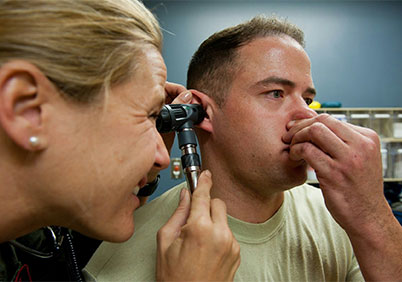 Evaluation by your physician includes examination of your ears, nose, and throat with scopes that allow for improved visualization. Nasal endoscopy may uncover signs of chronic inflammation such as redness, swelling, polyps, and discolored drainage from the sinuses. Combined with a careful history, the diagnosis of nasal allergies (allergic rhinitis), acute infection (less than 4 weeks), chronic infection (3 months or longer), and other less common causes of eustachian tube dysfunction are generally straight-forward.

In most cases, the symptoms of ETD will improve once the underlying cause of inflammation arising in the nose has resolved or been successfully treated. Viral upper respiratory infections (“common cold,” flu, etc.) are a common source of temporary ETD and generally do not require any treatment aside from decongestants and other over-the-counter medications to relieve the associated symptoms. Auto-insufflation, or forcing air into the ears, also aids in correcting negative pressure buildup and displacing fluid from the middle ear back into the throat.

Evaluation by an ENT physician is recommended for symptoms of ETD lasting for more than 2 to 3 weeks, particularly in the setting of purulent or discolored nasal secretions, fevers, nasal airway blockage, nosebleeding, or any other signs of significant sinus/nasal disease. Nasal allergy symptoms are often best managed with a topical nasal steroid spray such as Flonase ©. Steroid sprays are particularly useful for treating ETD, as the steroid both reduces the amount of cytokines within the mucous and flows with the mucous to treat inflammation at the openings of the eustachian tubes. Thus, nasal steroid sprays are considered the first-line therapy for this condition when other sources of ETD are not uncovered. Sinus infections with purulent secretions irritating the eustachian tube openings are often treated with antibiotics (with or without steroid pills depending upon severity and patient factors). Severe nasal allergies that persist despite treatment with allergy medications may require allergy testing to determine the inciting factor (pollens, molds, dust mites, etc.) followed by immunotherapy in the form of allergy shots to reduce the inflammation caused by unavoidable exposures.

Traditionally, patients with fluid in their ears and symptoms of ETD that fail to improve with medical management required pressure equalization tubes (PETs) placed into small incisions in their eardrums to prevent pressure and fluid buildup in the ears. However, a newer treatment is currently under investigation that involves balloon dilation of the eustachian tubes to re-establish the natural ventilation of the middle ear through the eustachian tube. As this technique gains traction, it may replace the need for PETs in many if not most patients with chronic ETD.

If you or someone you know is suffering from chronic dysfunction of the eustachian tubes, seek help from Dr. Kuperan and his team at Houston Advanced Nose & Sinus. They will diagnose the underlying cause of your condition and ensure that you are offered the best and the latest in treatments for this bothersome condition.