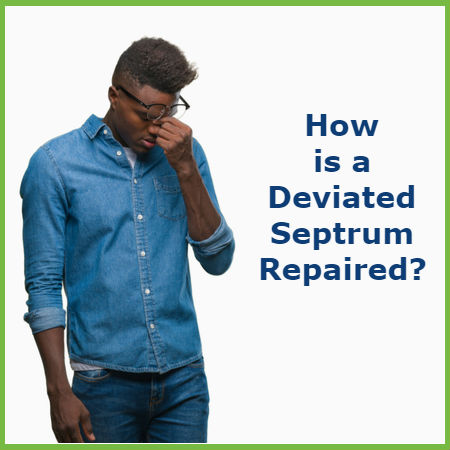 How is a Deviated Septum Repaired?

Deviated septum refers to a condition where your nasal septum, which is the tissue that divides the nasal cavity in half, becomes crooked or off-centered, causing a blockage to your nasal airways.

There are several causes for having a deviated nasal septum. Many people are born with a slightly and often unnoticeable crooked nose; this is due to compression on the nose during birth. Severe cases of the deviated septum are usually a result of a heavy blow to the face causing impact trauma. This could be a consequence from a direct hit, fall or accidental bumping. While other cases are results of congenital disorders. Septum deviation has also been associated with the Ehlers-Danlos Syndrome, Marfan syndrome and other disorders of genetic connective tissues.

Deviated septum is more common than most may think; it is believed that over 80% of the population have this condition. Signs that you may have a deviated septum are:

Treating deviated septum is now easier due to medical advancements that have been introduced. Among the best treatments is Septoplasty a surgical procedure performed to straighten the septum. The procedure takes about sixty to ninety minutes, and patients are usually allowed to go home after a few hours of observation.

It is performed through the nostrils; therefore, there are no bruising or external signs. Local or general anesthesia is applied then an endoscopy is used to visualize the nasal passages, evaluate the septum shape and make a route for minimum bleeding and inflammation. During the surgery, badly crooked portions are removed partly or entirely, or they may be readjusted and reinserted in the nose. Nasal packing after the surgery is inserted to prevent excessive bleeding. The patient will then be allowed to rest and wear off the anesthesia.

The recovery period after the deviated septum surgery is a very important phase to determine the success of the operation. Some patients recover in a week while others take a month to heal. All precautions should be observed to avoid infection. Also, taking all prescribed medications and refraining from any exertions will allow quick recovery.