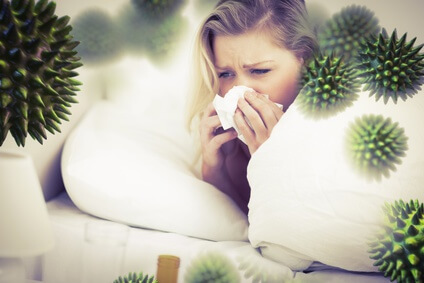 Nasal congestion is a common symptom frequently caused by nasal allergies (allergic rhinitis). Over time, inflammatory conditions such as allergies cause swelling and enlargement of the turbinates, which eventually decreases the flow of air through the nose. Nasal congestion often alternates sides several times daily (this is referred to as the nasal cycle). Other causes such as severe deviation of the nasal septum, nasal polyps, or a nasal mass can cause fixed, or constant, nasal congestion. As nasal breathing is impaired, snoring is often exacerbated. Patients who depend upon CPAP (continuous positive airway pressure) for relief of their obstructive sleep apnea often find it difficult to tolerate the mask at night when they have nasal congestion, as passive airflow is significant reduced when the nose is obstructed. Knowing the cause of nasal congestion is key to selecting an appropriate treatment.

Fixed nasal congestion results from stationary lesions within the nose that do not fluctuate with the nasal cycle (not significantly impacted by alterations in nasal blood flow).

The most common cause of fixed nasal congestion is a deviated septum – a condition in which the bone and cartilage dividing the two sides of the nasal cavity are displaced to one side, often accompanied by a spur that further narrows the impacted side of the nasal cavity. Approximately 80 percent of people have a nasal septum that is not perfectly midline; however, mild deviations generally do not impact nasal breathing. Moderate to severe deviations, particularly those with associated bony spurs, decrease the nasal airflow on one or both sides and can even obstruct sinus drainage in severe cases. Spurs that contact the adjacent tissues within the nasal cavity can be a source of pain and recurring headaches as well. Many patients with moderate to severe septal deviation have a history of nasal fracture or prior nasal surgery.

The Way Forward
Most nasal septal deviations can be visualized by a physician looking into the nose with a simple light and a speculum to enlarge the nostril opening. Nasal endoscopy with a flexible scope is often utilized to see the posterior, or deep, aspect of the septum and better appreciate the anatomy prior to consideration of surgery. The treatment for moderate to severe septal deviation with symptomatic nasal congestion is septoplasty, a surgery that involves removal of the deviated portions of bone and cartilage from the septum in order to allow it to achieve a more midline position.

The inferior (lower) turbinates warm and humidify air passing through the nasal cavities. They attach to the sides of the nasal cavities, and are formed by a shelf of bone surrounded by spongy tissue with the ability to rapidly swell and shrink in size. Patients with long-standing nasal allergies or inflammatory conditions have hypertrophied, or permanently enlarged, turbinates due to chronic inflammation and associated growth of tissues from increased blood flow and other factors. When severe, hypertrophied turbinates alone can cause significant nasal congestion or obstruction. One-sided turbinate hypertrophy is often noted on the opposite side of a significant septal deviation as well.

The Way Forward
Most hypertrophied turbinates can be visualized by a physician looking into the nose with a simple light and a speculum to enlarge the nostril opening. Nasal endoscopy with a flexible scope is often utilized to see the full extent of the turbinate prior to consideration of surgery. Initial treatment of turbinate hypertrophy involves nasal steroid sprays (such as Flonase ©) used once or twice daily in order to decrease inflammation and swelling over a minimum of 1 month. Patients who continue to have significant nasal congestion require surgical intervention. In-office radiofrequency ablation of the turbinates is a fast and effective procedure that reduces the amount of soft tissue present within the turbinates. In the operating room setting, surgical reduction of the turbinates is a common procedure to partially remove both bone and soft tissue for a definitive relief of nasal congestion.

Afrin© is a popular over-the-counter nasal decongestant spray used for temporary relief from nasal congestion. When intiially used, it provides rapid and effective relief of most cases of nasal congestion; however, using decongestant sprays for more than 3 days is associated with rebound nasal congestion, creating a cycle of dependence and eventual growth of the turbinate tissues that can lead to a fixed nasal obstruction. Long-term abuse can lead to perforations of the nasal septum, severe inflammation of the nasal cavities, and deformity of the nose (saddle nose deformity).

The Way Forward
Patients abusing nasal decongestants such as Afrin should immediately replace the decongestant spray with nasal steroid sprays twice daily. In the event that these sprays were abused for a prolonged period of time, the patient will likely require surgical intervention including turbinate reductions to find adequate relief of their nasal congestion. Perforated nasal septums can be corrected with surgery in most cases as well.

Fluctuating Nasal congestion is intermittent and often alternates sides. In most cases, it is caused by mild to moderate hypertrophy of the nasal turbinates, which may appear pale or have purple discoloration. Most cases of fluctuating nasal congestion are secondary to chronic rhinitis (chronic inflammation of the nasal cavities), with nasal allergies being the most common source of inflammation.

Non-allergic causes of nasal inflammation and swelling are less common and include exposure to irritants such as cigarette smoke, chemical vapors, temperature/weather changes, and some medications that induce swelling of susceptible tissues such as oral contraceptives and certain antidepressants.

The Way Forward
Topical nasal steroids are beneficial in treating many cases of non-allergic rhinitis. Environmental irritants such as cigarette smoke should be avoided. Patients diagnosed with vasomotor rhinitis (clear nasal discharge without an allergic trigger) are treated with an anticholinergic nasal spray such as ipratroprium (Atrovent© Nasal).

Intermittent or fluctuating nasal congestion is initially managed with medications, the most effective being nasal steroid sprays such as Flonase©. Patients that continue to have significant nasal congestion after 1 month of treatment would benefit from surgical intervention in the form of partial turbinate resection or radiofrequency turbinate ablation. Fixed, or constant, nasal congestion should be evaluated by an ENT physician with nasal endoscopy to determine the exact cause. Most cases of fixed nasal congestion require surgical correction for adequate relief. Although rapid and highly effective for the treatment of nasal congestion, nasal decongestant sprays should be avoided beyond 2-3 days of use in order to avoid a cycle of dependence and permanent (fixed) growth of the turbinates.

Seek consultation with the fellowship-trained Rhinologist, Dr. Kuperan  at HoustonAdvanced Nose and Sinus in order to determine the exact cause of your nasal congestion and obtain the best treatment possible for optimal long-term relief.